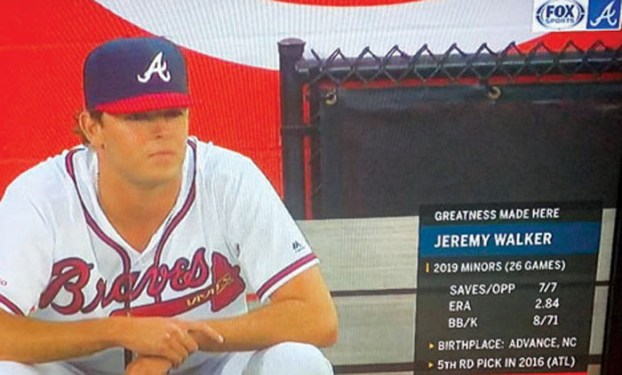 Jeremy Walker sits in the bullpen on his first night as an Atlanta Brave as sportcasters talk about his Minor League statistics.

Going to The Show: Walker recounts experience in Atlanta

Imagine getting promoted to Triple-A Gwinnett on July 5 and 19 days later getting called up to the Atlanta Braves. Imagine pitching a scoreless inning in your Major League Baseball debut in Philadelphia. Imagine holding the other team without a run in four of six appearances out of the bullpen in your first month in the big leagues.

That’s how Jeremy Walker’s 2019 season unfolded between July 5-Sept. 15. By making it to The Show, he did something most ballplayers can only dream of. And once he became a big leaguer, the 24-year-old held his own.

The 6-5 righthander from Advance was called up to Atlanta on July 24, roughly six years after going 7-1 for a 16-win Davie High team in 2013. The Braves were hosting — you can’t make this stuff up, folks — Whit Merrifield of Advance and Kansas City. Walker stayed in the bullpen all night as the Royals beat the Braves 2-0.

After an off day, the Braves headed to Philadelphia. It was the first game of the series on July 26. It was the bottom of the ninth, Atlanta leading 9-2. Walker was told to get his arm loose. The feverish energy left him numb as he trotted to the mound.

“Honestly, I don’t remember that much,” Walker said last week. “I remember warming up and not being able to feel anything. It was a lot easier to get amped up for that game than any other game I’ve pitched in. I don’t really remember running onto the field. I just remember getting to the mound and (catcher) Brian McCann giving me the ball and saying: ‘Are you ready to go?’ I said: ‘Yeah.’ At that point, I had to be ready, you know?”

“The first couple of pitches (to Kingery) were a little bit wild, but after that I settled down and I got a double play,” he said. “It was quick; it was seven pitches.”

The next night, Walker was back on the mound for the ninth inning. Again he faced three batters, striking out one to polish off a 15-7 victory.

Two nights later, he put up another goose egg, although he did walk a tightrope during Atlanta’s 6-3 loss at Washington. He walked three of five hitters, but catcher Tyler Flowers threw out a base stealer and Walker left with a scoreless inning to his credit.

A little over a week later, Aug. 8 at Miami, Walker worked 3 1/3 innings in a 9-2 loss. He threw 41 of 65 pitches for strikes, didn’t walk anyone and fanned two. He was nicked for a run — his streak of scoreless appearances ending at three — on five hits. A month later — Sept. 8, a 9-4 home loss to the Nationals — he allowed one run in 1 1/3 innings, although he whiffed three and threw 25 of 36 pitches for strikes.

A pretty good start to a major league career, right? Well, it was a mixed bag to Walker. He felt edges that need a little sanding. On top of that, he doesn’t have a boastful bone in his body.

“A lot of stuff could have gone either way,” he said. “The numbers were good, but I think I had a lot more that I could show that I didn’t. No matter how it would have ended up, I think I would have felt like that because there’s always room to improve. There’s always something else I could do to show them that I belong up there. (Overall) I felt good about it. It was a start.”

The Braves (97-65) finished four games ahead of Washington and repeated as National League East champs. Walker did not make the playoff roster, which was not a surprise considering he joined a formidable team. While Atlanta prepared for a playoff series against St. Louis, Walker and other arms and position players were sent to Florida to stay sharp just in case they were needed in later rounds. But the Braves bowed out, losing three games to two to the Cardinals. Washington would win the World Series, beating Houston in seven games.

“They sent me and three or four other pitchers down to Florida to stay hot in case they wanted to call somebody up after (the series vs. St. Louis),” he said. “They wanted to make sure we could be ready if there was an injury.”

Before COVID-19 put a stop to all sporting activities, Walker was nursing a minor shoulder injury — thankfully nothing more than inflammation — so he didn’t pitch in any spring training games.

“They had me shut down,” he said. “Right when we left I was about to start throwing again. I’m good to go now. I was excited for spring training, so I was pretty bummed out whenever that happened.”

When the 2020 season begins, Walker doesn’t know if he’ll be in Gwinnett or Atlanta.

“They like that I can go multiple innings,” he said. “They said expand on what I did in 2019 and keep doing the same thing. Get fastball command, refine my pitches a little bit and build off last year more than trying to change.”

When discussing his 2020 possibilities, you see an utterly unselfish side of Walker.

“In the bullpen now, we have a bunch of guys who are established with contracts, and they should be there,” he said. “I don’t think I should be taking any of their spots. They’ve earned it and they’re good. They said being able to throw multiple innings was big because most of those guys are one-inning guys. Coming into this year, I expect to be up and down from Triple-A. Obviously, I want to make the (Atlanta) roster, but we have established guys who are older than me. I went into camp trying to earn a spot, but at the same time I’m thinking I’m going to play a role up there whether it’s in the middle of the season, toward the end of the season or I could get called up and sent back down. Whatever it is, they told me I would have a role. When you have options, you’re going to get sent up and down.”

With everyone sheltering in place, Walker is living with his parents in Advance.

“They wrote me out a program and a rehab thing to do every day,” he said. “It’s been good being able to hang out with family. It’s quality time with them and getting my work in every day.”

The Braves have grandiose expectations for 2020. When the season will begin, of course, is uncertain.

“Guys like Dansby (Swanson), Ozzie (Albies) and Ronald (Acuna), they’re around my age,” he said. “They’re young, they’re energetic and I think we’re set for a really good year. Hopefully it will still happen. We’ll just have to wait and see.”

The major leagues’ hits leader for 2018-19 has played in 247 consecutive games, the longest streak among active players. Merrifield jokingly tweeted to Cal Ripken, who broke Lou Gehrig’s record in 1995 and played in 2,632 straight games: “Working on a 15-year extension so I can give your record a real run.”

Ripken replied with a video on Twitter: “Hey Whit. Because of the 25th anniversary, people are talking about my streak a lot lately. But I did notice that you have the longest streak in Major League Baseball right now. I’d like to tell you it gets a heck of a lot easier after 300. … I just want to say I think it’s a great thing. Your team can count on you. I would hope that you continue it. Good luck, man.”

By Marc Pruitt For the Clemmons Courier The Central Piedmont 4-A recently released its recognitions for all-conference awards for the... read more