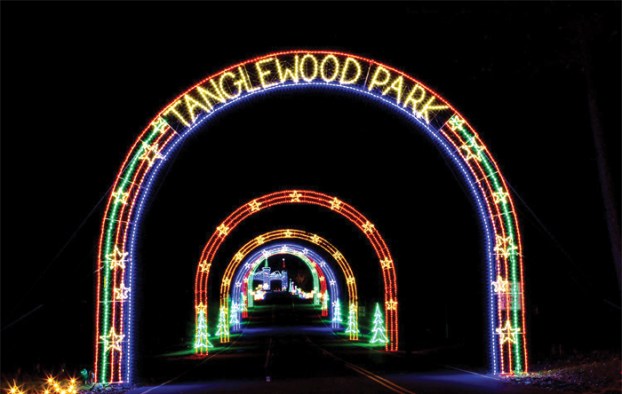 Record numbers: Tanglewood Festival of Lights proves to be even more popular than usual as the only show in town during pandemic

Everyone figured a record number of vehicles would be rolling into Tanglewood Park for the 2020 Festival of Lights because of the impact of the coronavirus pandemic and restrictions on crowds gathering in venues for holiday events.

After all, it was literally the only show in town. And even without having Santa, Gift Village or S’moresville due to COVID-19, about 61,000 vehicles — a 20% increase from a successful previous season of 50,000 vehicles — viewed the spectacular Christmas lights show from the middle of November until Jan. 1, 2021.

While revealing the numbers, Damon Sanders-Pratt, Forsyth County’s deputy county manager, said he considered this season to be “very successful in the sense that it’s something people could do and feel relatively safe in the pandemic situation. People could drive through in the safety of their cars and have some semblance of normalcy during the holiday season. The Festival of Lights is a Christmas tradition for a number of people and one they were able to continue.” 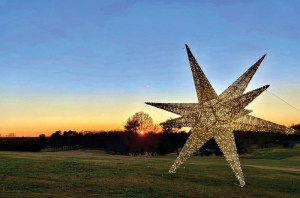 Brandi Chappell, marketing and events manager at Tanglewood, offered an estimate of approximately 380,000 people attending this season’s Festival of Lights compared with 309,000 visitors for the previous year. Typical estimates in previous years ranged from 250,000 to 300,000 people riding through to see the colorful displays.

The big numbers this season were achieved despite the opening weekend of Nov. 13-15 being shut down because of significant flooding in the park from torrential rains that fell the day before the projected opening.

“We did lose that weekend, but it appears so many nights exceeded the prior year’s equivalent dates substantially, so people just came on different days,” said Sanders-Pratt, who estimated revenues were only down about 1% overall despite not having food concessions or the gift shop being open. “The weather was great other than the flooding event, but at least that was early.”

Also, a couple of weeks into the festival, tightening government restrictions aa a result of the continuing pandemic forced the event to close at 10 p.m. each night, an hour earlier than usual.

“With closing earlier, most patrons adjusted their arrival time so we could not tell an impact on this,” Chappell said. 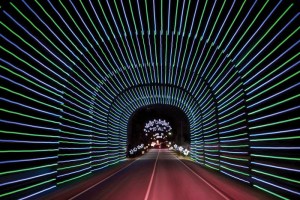 A significant addition for the 2020 Festival of Lights was a road-widening project just inside the Tanglewood Park’s entrance. Northtrail Road, which is at the first intersection inside the park before the entrance booth, was widened from two lanes to four lanes, allowing more vehicles to line up inside the park rather than backing up on U.S. 158, Harper Road and other connecting roads.

“Adding two lanes to the stacking capacity inside park was very helpful on a year where we had more vehicles,” Sanders-Pratt said. “It didn’t entirely solve the problem, but there’s always a challenge. We open at 6 p.m., so people start coming before that, but with the additional stacking we’re better able to handle it.”

Still, on the especially busy nights when traffic backs up onto U.S. 158 and Harper Road, it takes time for vehicles to navigate their way through the maze, according to Sgt. Brian Gieger, the head of the Clemmons community policing division of the Forsyth County Sheriff’s Office.

“A lot of people get tired of waiting, but if you’re in line at the end of the line sitting on the I-40 bridge (on Harper Road), you’re looking at a three-hour wait from that point by the time you get through the loop and the pay gate,” said Gieger, who added while widening the loop inside the park has helped, it’s still busy on many nights.

“The lines were moving better, but we are doing the best we can to help the residents of Clemmons get back to their residences,” he said.

“I don’t know what the deal was on that,” Gieger said. “We appreciate everyone having patience out there.” 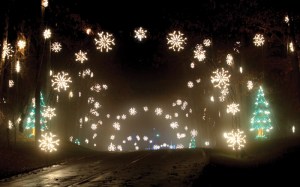 Sanders-Pratt, who used to work the festival previously as the county’s interim manager, said “the community has grown up around the Festival of Lights to some extent. This year we had 20% more cars, but the event really hasn’t grown much in the last six or seven years, but the village and Davie County across the bridge have grown a lot more than the Festival of Lights.

“But I understand that the traffic can be troublesome for people who live in the area and have learned to adjust and hopefully there’s at least as much benefit to the shop keepers and the gas stations and the restaurants than for the trouble that it can cause folks, and then the enjoyment for those who come and enjoy the lights. The kids have a great time, and hopefully it’s a net add for the community.”

By Mandy Haggerson For the Clemmons Courier Sherry Dishmond grew up in Mooresville as the younger of two siblings. “My... read more