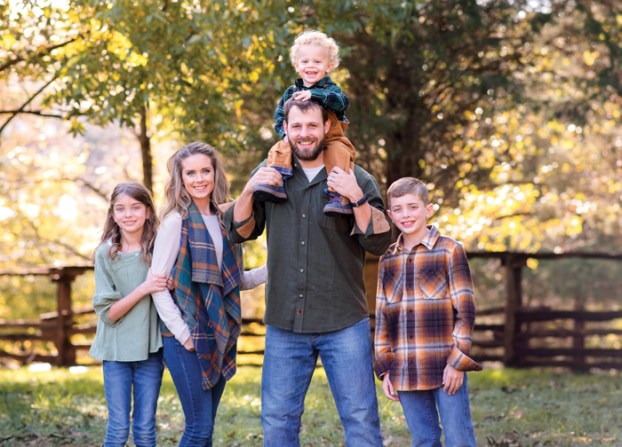 Sherry Dishmond with her family — from left: Ada, Sherry, Tanner on husband Tyler’s shoulders, and Max.

Sherry Dishmond grew up in Mooresville as the younger of two siblings. “My family was always at a sporting event growing up,” mentions Dishmond. “I enjoyed participating in track and softball.”

The active Dishmond admired her mom’s career as a certified nursing assistant (CNA). “As a high school student there was a program that allowed me to accrue credits towards becoming a CNA which I chose to do,” notes the driven Dishmond. “I began working for Walgreens for the next year and a half as a normal cashier and then got into pharmacy after becoming a pharmaceutical technician.”

Dishmond knew that if she wanted to attend college, she would need to find a way to help pay for it. Her older brother had joined the Navy and she had respected his choosing a career in service. Ultimately, Dishmond chose the Air Force and enlisted in 2006.

Dishmond was advancing her career and also focusing on starting a family. Her son, Max, was born in 2008 and then her daughter, Ada, was born in 2010. After her children were born, Dishmond was introduced to her future husband, Tyler. “We were both in the Air Force, and had mutual friends. Someone had mentioned that there was another person stationed here originally from North Carolina. When we talked we had a lot in common. That’s all she wrote,” says Dishmond. “We dated for six months and then I was deployed to Kuwait. It was so hard being away from the kids and Tyler. Ada was so young that when I returned she didn’t even recognize me. That was very difficult.”

After Dishmond’s deployment, she and Tyler were married. They also moved to Anchorage, Alaska. Dishmond decided to get her master’s of business administration from Park University to continue advancing professionally. “I really enjoyed what I was doing, however, being away from your family on deployments was very hard. Especially with the kids being such young ages. When I was put on the list to be considered to go to Korea, we decided it was time to get out of the military,” explains Dishmond. “I’m still a reservist, so I know that if we ever go to war they can call me up.”

The Dishmonds understood that with the decision to go back to the civilian world, it would also present the opportunity to go home to North Carolina. “We moved to Clemmons in 2019 and also had our daughter, Tanner,” mentions Dishmond. “It was nice living near family again. We lived in Washington, D.C., for a little over a year right before our move home, and we knew then that it was time for us to have a more kid-friendly pace of life too.”

The Dishmonds haven’t regretted their decision to move home. “We enjoy all the kids’ activities that they are involved in — whether it’s baseball or softball. We also like to take them skiing and snowboarding. We go camping and hiking a lot too,” says Dishmond. When not spending time with the children, Dishmond is embracing her new position as the human resources manager at Carolina University. “I really enjoy what I do, so it’s nice that I’m able to do it closer to family.”