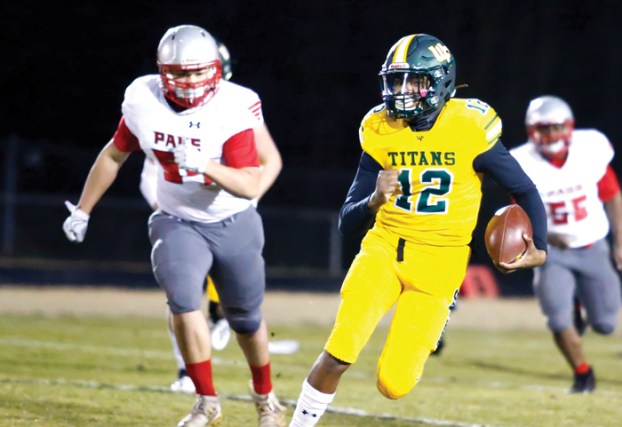 The script for the West Forsyth football team couldn’t have gone much better through the first two games of the season.

After throttling Oak Grove 44-21 in the opener two weeks ago in Clemmons, West Forsyth dominated visiting Greensboro Page from start to finish and hammered the Pirates 45-0 last week.

“It’s been good,” said Coach Adrian Snow of the Titans. “We’re young. It gives us a chance to try and get things going. I’ve been proud of our kids. We’re learning. We’ve got some kids probably at different places, but we ain’t bad. I think we’ll continue to get better.”

West Forsyth (2-0) stumbled on its first possession after running back Nasion Johnson fumbled on its 47 with 9:46 left in the first quarter. Page (0-2) did nothing with its possession and punted. Tyler Styers of West Forsyth blocked it and the Titans recovered it at the Pirates’ 26. Just four plays later, Jevonte Long scampered in for a 5-yard touchdown run to help give West Forsyth a 7-0 lead with 5:31 left in the first quarter.

“We had to adapt, which was cool for us,” Snow said. “I was proud of our coaches. I felt like we found some ways to move the ball, which was good. But they did some good things, which was neat.”

After the free kick following the safety the Titans took over at the Pirates’ 40. Running back Nasion Johnson carried it the first four plays of the drive, but Long carried it the final two plays, including a 6-yard touchdown run to help extend the lead to 17-0 with 4:30 left in the first half.

“They’re both talented. There’s no doubt about that,” Snow said. “They know how to run the ball. So it’s really cool. They’re really best friends. It’s really a good thing to see them be around each other. They work hard, they feed off each other, and it’s been good.”

West Forsyth kept pouring it on late in the first half. It took over on the Page 34 with 2:40 left. Long carried it three of the first four plays of the drive, but Johnson carried it the final two plays, including a 14-yard touchdown run to help make it 24-0 with 20.1 seconds left.

“He’s my brother (figuratively speaking),” Long said of Johnson. “We have a good week of practice every day. We don’t argue for reps, and we just play football and have fun. We can’t do nothing without the line, so I’ve got to say, ‘All glory to them.’ We just run the ball.”

The rout continued in the second half for the Titans. The Titans took the opening possession of the third quarter and scored five plays later after quarterback Kian Bailey ran in for a 15-yard touchdown run just 2:14 into the quarter to help push the lead to 31-0.

“As long as we have fun we can do anything,” Long said.

West Forsyth had seven different players rush the ball, and those players combined for 265 yards rushing on 47 rushes. In contrast, Page was held to minus-7 yards rushing on 18 carries. Page finished with 7 total yards.

“I think both of them (Johnson and Long) are home run hitters,” Snow said. “They’ve got a chance. It’s a good thing. Every time you give it to them you’ve got a chance to do some things, but I think we’re getting better throwing the ball, which is good.”

Bailey was 8-of-15 passing for 77 yards, a touchdown and no interceptions.

“That’s part of the maturation process of a quarterback,” Snow said. “He’s going to be really special. But he continues to grow and get better, and it’s been good.”

West Forsyth put an exclamation point on the game after Jaylen James caught a 5-yard touchdown pass from Bailey to help extend the lead to 45-0 with 11:35 left in the game, which trigged a running clock.

“The cool thing is you get to play people,” Snow said. “We want guys to play. And that’s a big thing too. I mean we want to win, there’s no doubt about it. Ultimately, we’ve got great kids, man. They do a great job. It’s been cool just to see all of them play the last two games. And hopefully we can keep it going.”

The remaining five games of the regular season likely won’t be so easy for West Forsyth. Conference play starts Friday night, and every game will likely be competitive. East Forsyth, one of West Forsyth’s biggest rivals and also the two-time defending NCHSAA Class 4-A state champion, comes to Jerry Peoples Stadium in Clemmons Friday night.

“Some people started conference the first day,” Snow said. “That would’ve been really tough. At least you’ve worked on a few things, and now it’s here we go. It’s five weeks of ‘come get you some.’

East Forsyth (0-2) has struggled so far this season, losing to Glenn in a non-conference game even though they’re both in the Central Piedmont 4-A and Greensboro Grimsley.

“No records matter,” said Snow, who’s been the head coach of the Titans for 13 years. “We were down and they were really good, and we had a chance to beat them here. It isn’t going to matter. It’ll be a slugfest, and it’s what it’s been for 13 years. I don’t think it’ll be anything different.”

Coach Todd Willert of East Forsyth has been the head coach for the Eagles since 2003, and more much of that time the Eagles and Titans were in different conferences despite both being Class 4-A teams in Forsyth County. The Titans have always been in the Central Piedmont 4-A, but the Eagles were in the Metro 4-A and Piedmont Triad 4-A until the fall of 2017. Since then, the two teams have been in the same conference. The Titans won in 2017 and 2019 in Kernersville, and the Eagles won in Clemmons in 2018. So clearly home field advantage means nothing in this rivalry.

“We’ll go play, see what happens, and hopefully we can come out victorious,” Snow said. “But Todd does a great job. We’ve become really good friends, and it’s special when you compete against friends. And it’s even more special if you win. So that’s the motto, ‘See what we can get done.’”

The players for West Forsyth know how special the rivalry is with East Forsyth, but they also know that they have to compete against Glenn, Reagan, Davie County and Reynolds if they want to win the conference title. West Forsyth played at Glenn in 2019 on the final night of the regular season when both teams were undefeated in the Central Piedmont 4-A.

Athlete of the Month: Logan McDonald