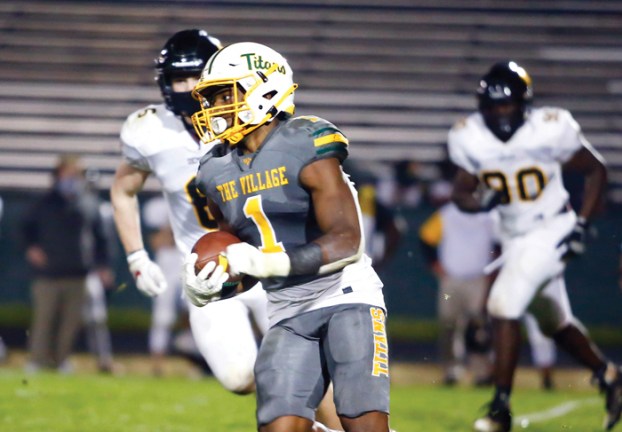 Running back Nasion Johnson. Photo by Brad Richard. To view and order photos, go to https://www.ncprepphotos.com/

After having missed the previously-scheduled last two games because of COVID-19 protocols and contact tracing, the West Forsyth played Reynolds in a Central Piedmont 4-A game at sweltering Jerry Peoples Stadium, its final scheduled regular-season home game of the spring season.

And although West Forsyth hadn’t had its full team together since throttling Greensboro Page in a nonconference game three weeks before, the Titans barely missed a beat last Friday night against Reynolds, pummeling the Demons 42-12. 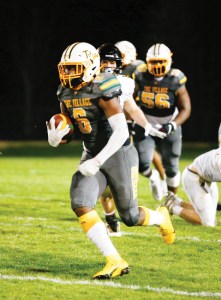 Snow added that it was tough for the players and the coaching staff to have gone through the two-week quarantine.

“I think the word is — it’s frustrating, but our kids, they’re resilient. They’ve kind of dealt with it all along,” Snow said.

To add to it, West Forsyth didn’t find out about the two-week quarantine until the day before it was supposed to play cross-county rival East Forsyth, and two-time defending NCHSAA Class 4-A state champion, in the Central Piedmont 4-A opener.

“We want to play,” Snow said. “That’s all we wanted to do. You put a lot into this. Some people don’t understand it. When you put this much into it you want to get paid (figuratively). The only way you get paid is to play.”

After sputtering early in the first quarter, the Titans started to control the Demons (1-4, 0-3) later that quarter. In doing so the Titans piled up 480 yards rushing, including 280 yards on 24 carries for Jevante Long, and 181 yards on 17 carries for Nasion Johnson.

“Tiring. Very tiring, actually. And to run like that, and we only had a day of practice,” Long said of the layoff and having had to play in temperatures against Reynolds that were in the mid-80s at game time. “We only had like a day of practice. It was hot, so I was like, ‘I’m not ready.’ But you know, we pulled through.”

Long echoed Snow’s sentiment that the Titans just wanted to play. Long also said that Johnson came to his house regularly during the two-week layoff to do workouts.

“I can’t say I’m surprised,” Long said. “But we work hard. We come out here with a purpose, and we do we what we got to do.”

Johnson scored on a 24-yard run with 42.5 seconds left in the first quarter, but Jaylen James missed the extra point to keep the score 6-0.

On the ensuing possession, quarterback Caden Davis, who is 6-foot-4, 225 pounds and is going to play football at Fayetteville State, lined up under center on fourth-and-1 on its 48 after lining up in the Shotgun the rest of the game. Davis fumbled the snap and Chris Van Kleeck of West Forsyth recovered it.

Davis finished with 62 yards rushing on 14 carries and two fumbles. He was also 21-of-43 passing for 236 yards and three interceptions.

Taking possession at the Reynolds 48 West Forsyth methodically drove downfield, and 11 plays later, Long scored on a 1-yard run and Johnson added a two-point run to push the lead to 14-0 with 7:54 left in the second quarter.

“I was really proud of our defense,” Snow said. “We gave some yards, but who cares about that? Last time I checked, that ain’t have nothing to do with it.”

Although Reynolds has struggled, with its lone winning coming on opening night against struggling Parkland in a nonconference game, Snow knew he had a formidable task with Davis, who is also top-notch basketball player.

“At the end of the day you didn’t care who you played,” Snow said. “We’d played the New York Giants if they’d told us. We just want to play.”

Davis scored on a 2-yard run on the next possession, but the extra-point kick failed to keep it 14-6 with 4:11 left in the first quarter. West Forsyth answered on its next possession after James caught a 13-yard touchdown pass from quarterback Kian Bailey, and Johnson added a run for two points to extend the lead to 22-6 with 1:53 left in the second quarter.

“We’ve got some really good backs in our league that do a really good job, but I think tandem-wise, the two (Johnson and Long) are pretty good. But the thing about (last Friday), it’s hot. So it was good to kind of throw one in there. They don’t care.

West Forsyth marched down the field on its next possession, and it scored on a 13-play drive after Long scored on a 27-yard run to help extend the lead to 35-6 with 4:15 left in the first quarter.

Reynolds answered on the ensuing possession after Davis scored on a 1-yard run with 1:24 left in the third quarter to help slice the lead to 35-12.

Davis was intercepted with 6:30 left in the fourth quarter, and Bailey scored four plays later on a 3-yard run to push the lead to 42-12 with 4:31 left.

“I think we always have to evolve,” Snow said. “Kian threw some good balls tonight, to be honest with you, I know he had two interceptions, but one of them was a great play by their kid.

“We probably could’ve kept running it and it wouldn’t have mattered. Ultimately you have to continue to work on things, and that’s what we do.”

“We’ll enjoy this one, and Monday we’ll get ready to play the Raiders and see what happens,” Snow said.

In addition Coach Josh McGee of Reagan played quarterback at West Forsyth, and after graduating from Winston-Salem State, McGee was an assistant under Snow at West Forsyth. Both coaches and their families are close.

West Forsyth follows the Reagan game with the regular-season finale at Davie County.

“All I have to say is, they don’t like us. We don’t have any problem with them,” Long said. “They know West Forsyth — always rivals. We know how to stop them. We’ve been watching games, we’ve done seen film, so we know just like they know how to stop one of these teams.”

Reagan lost to East Forsyth 42-12 last Friday night, but it also lost star running back Bryson Canty to a left-ankle injury on the first play of the game.

“There’s a lot of people that are our rivals to be honest with you” Snow said. “But that’s a good thing. That means you’ve done a good job of beating people.”

And after returning to play last week following a two-week pause Snow has a message for his players.

By Janie Peterson For the Clemmons Courier The girls varsity lacrosse team made school history this spring, and not just... read more