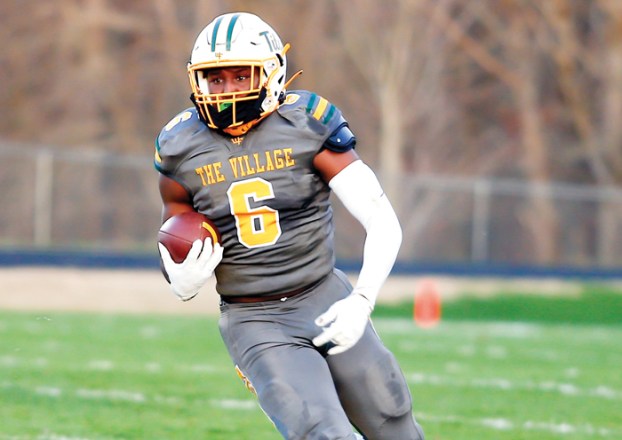 PFAFFTOWN — Last Friday night’s game at Reagan wasn’t a masterpiece, but a win is a win for the West Forsyth football team.

Running back Jevante Long galloped in for a 10-yard touchdown at the end of the second overtime to help the Titans defeat the Raiders 28-25 in double overtime.

He proved his statement to Snow by scoring on the first play in the second overtime to win the game.

It wasn’t Long’s best game, but he saved his best for last. He finished with 87 yards on 18 carries, but he had a fumble. He also scored two touchdowns, one in the first overtime and the second in the second overtime to win the game.

“The biggest opponent is yourself,” Long said. “You could tell, first and second quarter I was going through it — fumble. But you know everybody was behind me. All my players were telling me to keep going. They said to keep it rolling, and that’s what I did, baby.”

West Forsyth was leading 14-7 in the fourth quarter, but quarterback Kian Bailey fumbled it after a 6-yard run. Jalil Rogers of Reagan scooped up the fumble at the West Forsyth 48 and ran it all the way back for a touchdown to make it 14-13 with 2:54 left. Rocco Gigliotti nailed the extra-point kick to tie the game.

Both teams had the ball at the end of regulation, but neither team came close to scoring.

“At the end of the day when they scored we had to get up and line up again,” Snow said. “That’s what we did and we had to find a way.”

The fumble and touchdown return was a microcosm of the game for the Titans. They had two fumbles, and they also had 15 penalties for 145 yards.

“At the end of the day, we got to where we started losing our minds,” Snow said. “That’s what I talked to them about the most. We’ve just got to control ourselves and do a better job when it comes to that.

At the end of regulation, Reagan won the coin flip and elected to play defense first in the first overtime. In high school overtime, each team has a chance to score, and each team starts at the 10-yard line with four chances to score. West Forsyth took the ball first, and after a 3-yard run by running back Nasion Johnson, Long scored from 7 yards to give West Forsyth a 20-14 lead. Reagan was called for an illegal participation penalty on the play, so Snow elected to go for two points. Long lined up in the Wildcat formation and scored to push the lead to 22-14.

Reagan took over at the 10 at the end of the first overtime. On fourth-and-goal from the 11 quarterback Kam Hill fired an 11-yard touchdown pass to Chris Joines in the corner of the end zone. However, down 22-20, Reagan had to go for two points. Hill rolled around and passed it to Tazhae Woods in the end zone to tie the game at 22.

“It’s called getting up and going to work the next day,” Snow said. “You’ve just got to go again, man. At the end of the day, that’s life. Sometimes people are going to make big plays and you’ve got to decide if you’re going to quit or if you’re going to stand up and fight.”

After the play, Hill was called for an unsportsmanlike conduct penalty and was ejected. He was replaced by Makhi Purvis.

Because of the 15-yard unsportsmanlike conduct penalty on Hill, Reagan started the second overtime at the 25-yard line instead of the 10. Although West Forsyth had a roughing the passer penalty Reagan’s drive was halted at the 14-yard line. Gigliotti came and nailed a 31-yard field goal to give Reagan a 25-22 lead.

West Forsyth took over at its 10 after the field goal, and Long scored on the first play to win the game.

Despite the way the game finished Snow said he was unfazed by it.

“I’ll be honest with you, I’ve gotten to where stuff like that don’t bother me,” he said. “That’s called being old. And being old, you’ve been through it. At the end of the day, I think we have to be emotionally stable. If you’re not emotionally stable at that point, it’s hurtful.”

Reagan answered early in the second quarter after Joines caught a 28-yard touchdown pass from Hill to help tie it 7-7 with 11:43 left. On the ensuing possession West Forsyth scored on an 8-yard run by Johnson to help give it a 14-7 lead with 8:14 left in the second quarter.

Much is on the line Thursday for West Forsyth when it is scheduled to complete its regular season against rival Davie County at 7 p.m. in Mocksville. Since East Forsyth defeated Davie County 31-14 last Friday night and West Forsyth also won, both East Forsyth (3-2, 3-0) and West Forsyth controls its own fates for both the conference championship and NCHSAA Class 4-A playoff implications. East Forsyth finishes at home against Glenn (4-1, 2-1). It’s the second time the two schools will have played each other. They met in the season opener as a “nonconference” game and Glenn won 18-0 at Glenn. Friday’s game is at East Forsyth.

“It sets up pretty big,” Long said of finishing the regular season at Davie County. “They’re one of our biggest rivals. I think it’s going to be a game.”

There is just one playoff this season for 4-A instead of the traditional 4-AA and 4-A, and there are also only 16 teams per region, and one less game, so only the conference champion is the automatic qualifier. There will likely be one other team, and the outside shot of two teams, making it as a wild-cards.

“It don’t matter. You’ve got to win. If you don’t win, it becomes a problem,” Snow said. “…Gotta find a way to win. Control your own destiny.”