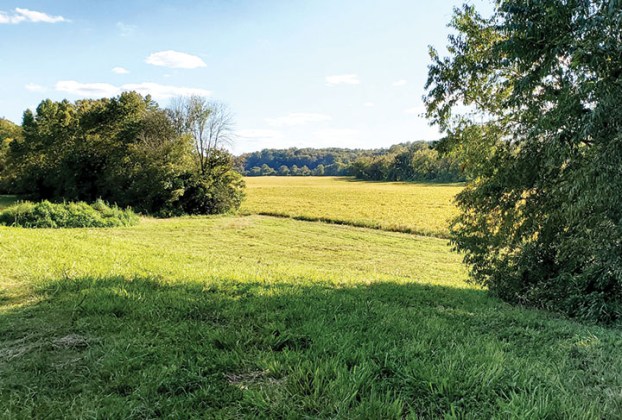 Photo by Andy Kelly This is a view of the 246-acre farm property in western Forsyth County along the banks of the Yadkin River showing the remoteness of the area.

First of a two-part series

When Jim and Jean Messick lived on the “farm” by the Yadkin River from 1956 to 1961, she was aware of the historic significance of the Battle of Shallow Ford and the Great Wagon Road but didn’t know at the time that many years later she and her husband would play a key role in preserving the property.

The Shallow Ford crossing of the Yadkin River served as a link in the Great Wagon Road and the site of the Battle of Shallow Ford where the Patriots forces claimed an important victory in 1780 that was considered one of the turning points of the American Revolution.

It’s all documented in the history books. And now, the 246-acre farm property in western Forsyth County along the banks of the river is going to be preserved as a site with walking trails and opportunities for canoeing, camping, fishing and passive outdoor recreation — all close to Lewisville, Huntsville and Daniel Boone’s homestead.

It was made possible when Jim and Jean Messick made the decision to transfer the property to the Winston-Salem Foundation via a gift deed in 1997. Jim, who was a grocery buyer for over 40 years for J.G. Messick & Sons, parent company of Food Fair, passed away in 2014.

“I never wanted it to be full of houses out there,” Jean Messick said. “We wanted it preserved.” 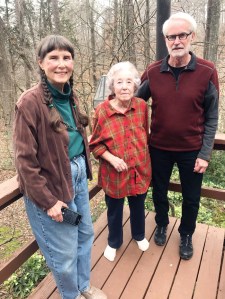 Photo by Jim Buice
Jean Messick stands between Merrikay Brown of the Lewisville Historical Society and Andy Kelly, who is a member of the Sons of the American Revolution and helped lead to a deal to preserve Messick’s property as a historic site.

However, that outcome took a few twists and turns before the Conversation Fund, which works with public, private and nonprofit partners to protect America’s legacy of land and water resources while achieving environmental and economic outcomes, purchased the land in December 2020.

Mike Leonard, a local official for the Conservation Fund of Arlington, Va., said that $1 million was raised from a revolving internal fund and additional capital sources.

“Right now, what we’re working on is getting funds from the state of North Carolina,” Leonard said. “So the state basically buys the property from the Conservation Fund. The property will cost $2,800,000.”

House Bill 242 sponsored by Rep. Jeff Zenger of Lewisville along with Reps. Donny Lambeth and Lee Zachary was introduced in March to provide funding toward the initiative. Also, Senate Bill 295 was introduced to fund a number of Revolutionary War projects across the state, including the Shallow Ford.

“The Shallow Ford only gets $1.8 million, and that’s all that’s needed,” Leonard said of the state funding. “The people in the House and Senate will figure that out.”

If the state funding doesn’t come through, the Conservation Fund has applied for grant money through conservation organizations, which could be another option to finalize the transaction.

But it took some time to get to this point.

First, the Messicks, who lived in a house from 1956 to 1961 on the property owned by Jim’s dad, eventually bought the property. Jean Messick said her father-in-law bought pieces of property in the area around 1950 and at one time owned about 1,000 acres out on the farm.

“The farm belonged to my father-in-law, and when he died, I told my husband, ‘well let’s go get a loan because now is the only time you’ll have a chance to get the farm,’ ” she said. “His attorneys took it over, and then we bought it from them in 1981. It was part of his estate.”

Meanwhile, the Messicks had started a family in their earlier days living in an old house on the farm and then moved into Winston-Salem for a number of years before coming back to Lewisville where they purchased land and built a house off of Conrad Church Road. She said she has lived in the current house for over 40 years.

Why build in that location rather than possibly going back to the farm?

“Because it was more private,” she said.

Photo by Andy Kelly
This is a photo of what the Yadkin River, which is up on this day, looks like from the Shallow Ford property.

The 246 acres were part of seven tracts in the Shallowford and Williams roads areas of the county bordering the river at the Shallow Ford.

The Messicks — who also gave land to the Lewisville Fire Department for what she called the “pretty building,” Station 13, that was built on nearby Shallowford Road — wanted to do what they could to make sure the site was preserved as a farm or historic site.

So they set up the Winston-Salem Foundation deal with the eventual sale establishing an endowment to support multiple local and national charities.

But then a few other things had to happen for everything to fall into place.

Enter Andy Kelly, who became a Sons of the American Revolution member in 2017 and attended the Battle of Shallowford commemoration, which included a battle site tour, in October 2017.

“I was impressed with the fact that the surrounding area had so much Revolutionary and Civil War history and was pretty much the same as 250 years ago,” said Kelly, who spoke with Sam McCormick, another SAR member who has a real estate background, and they discovered the Messick property had been transferred to the Winston-Salem Foundation. “We contacted them, and they referred us to Merrikay Brown of the Lewisville Historical Society, who they thought could evaluate our preservation ideas and possibly introduce us to Ms. Messick.”

Brown said that Messick has been a member of the historical society since 1991 when Lewisville became a town.

“Jean told me about 20 years ago that she wanted to preserve the land and she had done something toward doing that when they had put the rights over to the foundation,” Brown said.

Kelly said that the first meeting with Messick came in August 2018, and she liked the ideas that were presented. That led to numerous meetings with attorneys, Forsyth County commissioners, state personnel and Winston-Salem Foundation representatives, but Kelly said that not much progress was made at that time.

Then Kelly met Leonard, who retired as a partner with Womble Bond Dickinson and had served on the national board of the Conservation Fund from 2004 to 2019 (including the last five years as chairman), at an unrelated gathering and discovered they had a common interest — the Shallow Ford.

“I’ve been involved in all kinds of land deals over the years, and I knew about this land,” said Leonard, who went out there in ’90s to wade the Shallow Ford. “I met Andy when he came to my house for an Appalachian Trail Conservancy event, and he later called me and said, ‘Mike, if property out on the Shallow Ford is available, would you be interested in helping with it?’ And I said a very quick yes.

The fund used a bridge loan along with donations from a couple of individuals and state foundations to acquire the property.

Now it’s a waiting game until state funding or grant money is secured. Leonard said he hopes the park will be available for public use sometime in 2022.

In addition to the Battle of Shallow Ford and being used as a crossing for the Great Wagon Road, the area was also the site of the Civil War skirmish, Stoneman’s Raid, in 1865 where Gen. George Stoneman’s Union troops crossed the Yadkin at the Shallow Ford. It also served as a crossing by Gen. Charles Cornwallis and the British Army in 1781.

As its name implies, the Shallow Ford is a shallow section of the Yadkin River and was a major crossing of the Yadkin River through the 18th and 19th centuries. It is a natural rock formation that enabled animal crossings, including buffalo, for thousands of years — and was once used by Indians to cross on foot and horseback.

“You know, this is very unique,” Leonard said. “If you know about the Revolutionary War, you know about the significance of this. There were five fords that came into play, and of those five, the only one that remains in the state it was in back in 1781 is the Shallow Ford.

“It can remain that way, and it offers the perfect place in North Carolina to tell this important story. Plus this property contains one of the best preserved sections of the Great Wagon Road that is around. If not for the Messicks, this never would have happened.”

Next week: A profile on Jean Messick looking back at the past on the farm and in the area.

By Mandy Haggerson For the Clemmons Courier Corky McClellan has always called Clemmons home even though he spent many years... read more