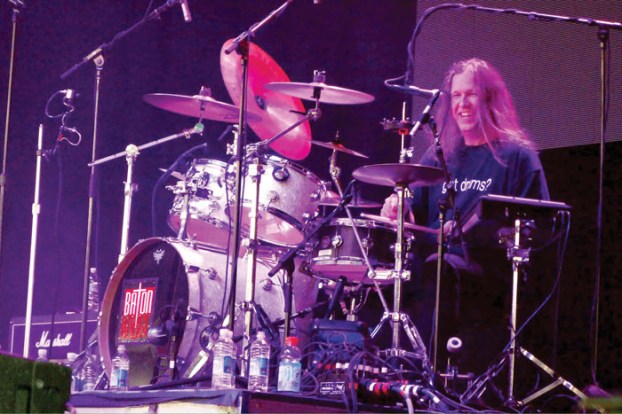 Corky McClellan has always called Clemmons home even though he spent many years traveling the country. The younger of two children, McClellan enjoyed his idyllic childhood. “It was before smart phones and technology, so I spent my early years playing outside riding bikes, sports with the neighbors, and lots of activity until that dinner bell was rang by my mother,” recalls McClellan. He also recalls from a young age realizing his appreciation and natural abilities for music. “I grew up in a home where music was always around. At the age of 3, I taught myself how to play the song ‘Lean on Me’ with two fingers,” mentions McClellan. “My dad was a bass player, and even worked his way through college utilizing his talents which inspired me. His mom and my grandfather were also incredibly gifted.”

McClellan began taking music lessons initially in the fifth grade for the snare drum. He also took music lessons with the guitar and piano from some local legends that further inspired him to train and learn more. “When I was in the ninth grade, I knew that I wanted to go to the School of the Arts. I researched what it took to get in, and I needed at least a B average. At that time, I was more of a C and D student. Once I learned the academic requirements needed to get in, I was on honor roll the next semester, and was accepted into the program,” recalls McClellan. “I loved it and soaked up every minute of it.”

After McClellan graduated, he decided to spread his wings and traveled with his band all over. “We were called the White Wing and we traveled all the way from Puerto Rico to Newfoundland playing a week at a time at each location,” remembers McClellan. “After this adventure, I felt like Los Angeles was calling me. I headed to the Musician’s Institute in Hollywood which was a yearlong program. After three months in the program, I decided I was ready for my first audition. Because this was before the internet era, everything was on a bulletin board. I randomly picked a number. I was surprised when I got the gig on my first try.” McClellan had joined a band that was called Baton Rouge and was put under contract by Atlantic Records. “I loved it. We did MTV videos and tours from 1987-1992. It wasn’t until bands like Nirvana came onto the scene and really changed the landscape of what people listened to that we stopped playing.”

McClellan was building his musical resumé during this time in Los Angeles, but he would also connect with his future wife during that time, Cella. “We met while we were both there, but didn’t have a serious relationship until later,” explains McClellan. “After Baton Rouge Band stopped playing, I couldn’t get excited about the new musical landscape, so I headed to Key West and Cella moved to Miami. I had made the decision to move to Key West based on a coin toss. When I first moved, I lived in a two-man tent that I got from a Sears gift card given to me from my brother-in-law. Both Cella and I traveled a bit more before reconnecting in San Antonio, Texas. I reached out to her then and we have been together ever since. We will be celebrating our 25th year anniversary this year and I can say marrying her was still the best day of my life in 1996.”

The newlyweds lived in Nashville, Tennessee, for three years. “Our oldest son, William (now 22) was born while there and I realized that it wasn’t my turn anymore. I was in a band at that time and teaching, so we decided to finally head to Clemmons to be near my family to focus on raising a family. I had realized that with music you either have so much money that it doesn’t matter or so little money that it doesn’t matter. That wasn’t true anymore being a parent,” mentions McClellan.

Fortunately for McClellan, his family had a business he was able to work in when they moved back to Clemmons. “I worked in the home security business when we moved home, and expanded our family,” says McClellan who became a parent to daughters, Sylviana (21) and Olivia (13). “We sold the account base for that company in 2016,” explains McClellan. He found that he could still have the best of both worlds, his zest for music and raising his family in the town that he called home. “Obviously with COVID-19 we haven’t been able to play music in venues like we were accustomed. I’m really excited that it’s going to be changing. My first time back at the Ramkat will be April 16 where our band will be playing Tom Petty’s album,” notes McClellan. hE is active in several bands in the area: The Vagabonds’ Saint Society and the Plaids just to name a few.

When McClellan isn’t playing himself, he also likes to help other aspiring artists record and hone their talents. “I started S.E. Music Services, which stands for self-employed,” laughs McClellan. “I enjoy teaching students from all age ranges on the drums, guitars and piano, and also help budding artists record their music,” says McClellan. “It’s fun helping people realize their dreams and passions.” McClellan also wears his other professional hat with starting another company, the Home Systems Helper. “With all our smart technology these days that people bring into their home, it opens up consumers to being hacked and I help protect their networks so that’s not possible and that they stay safe,” explains McClellan. “With this smart technology there’s a lot of conveniences, but there’s also a lot of dangers if not appropriately guarded.”

McClellan’s balancing act professionally as an entrepreneur has also afforded him a flexible schedule with his family, which is his pride and joy. “I can’t believe how quickly they grow up. Being a parent is the most important job that you’re probably the least prepared to do. I have learned way more than I’ve taught but it’s quite the ride,” reflects McClellan.

Our neighbor has shown how through following your dreams, making new ones, and never being scared to alter your path to take a chance you can land exactly where you’re supposed to.

By Jay Spivey For the Clemmons Courier PFAFFTOWN — Last Friday night’s game at Reagan wasn’t a masterpiece, but a... read more