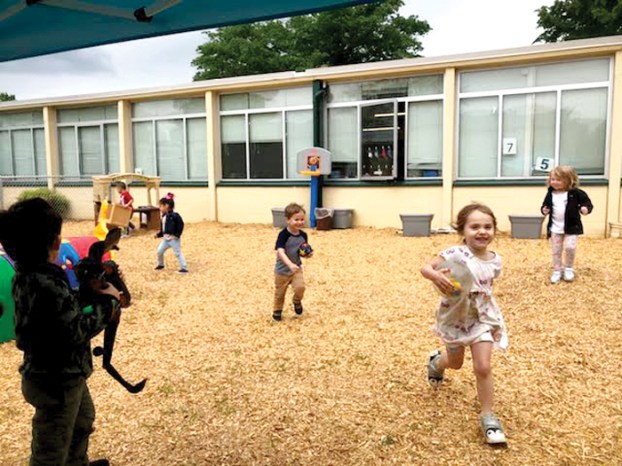 COVID-19 has provided many challenges for in-person learning in schools throughout the state this past year. Jenny Huggins, a teacher in the pre-kindergarten Exceptional Children’s (EC) program at Southwest Elementary School in Clemmons, saw an opportunity to make some improvements for the nine students in her class. The EC program provides specially designed instruction to children with a broad spectrum of abilities and disabilities, striving to promote their cognitive, physical, social/emotional, and vocation development. With these students being back in the classroom since November of this year, they were unable to use their school’s playground due to COVID-19 restrictions. “We love playing outside, but needed a safe place to do so,” explains Huggins of her 3- and 4-year-old students. 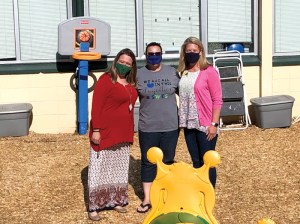 Huggins began thinking of ways to make that possible. “When we went back to school, we could only be outside in small groups because it was difficult for some of our little friends to understand boundaries and they had a hard time staying with their group. I knew that we needed a fence for the entire class to go out and enjoy interacting at the same time,” says Huggins. She started a GoFundMe explaining that a fence would allow her class to safely get their much-needed outside time. The cost of fencing and installation was very expensive; however, Huggins was not deterred. “Within a week, the GoFundMe initiative raised $4,500. After that, money still trickled in and raised $5,345 total,” notes Huggins. Leslie Hege, president of the Southwest Elementary Parent Teacher Association, commends Huggins’ efforts. “In the midst of a pandemic, Jenny was able to raise money to fence in the area outside her classroom, provide additional toys, such as a trampoline, basketball goal, cars and other equipment that would stimulate the children. She made it come together and quickly,” Hege notes. “She also had other items donated like mulch to make it look nice and feel more comfortable.” Equally grateful for Huggins’ efforts is Southwest’s principal, Summer Jackson. “Jenny has worked extremely hard to make this project a reality. She approached me about the fence and within a week had the money raised.”

The positivity of Huggins’ project spread. Principal Jackson and Huggins had spoken about the need also for shade in the area that was created by Huggins. “When we talked about the shade, I had the idea to mention it to the PTA. After meeting with the PTA everyone agreed and voted that paying for the sunshade was a necessity,” explains Jackson. Hege also notes, “The PTA recognized the importance of supporting this project. Southwest is a 60-year-old school. We typically have to spend the funds on updating the great spaces, but we saw the need for donating to this special space as critical this year.”

Huggins is grateful for the support she received from the community, parents, teachers and principal. “In the end, everyone came together to make a difference in the lives’ of these children. The icing on the cake is seeing the children play and enjoy the fruits of our labor every day,” says Huggins.

By Mandy Haggerson For the Clemmons Courier Melissa Stone grew up in South Florida as the older of two sisters.... read more