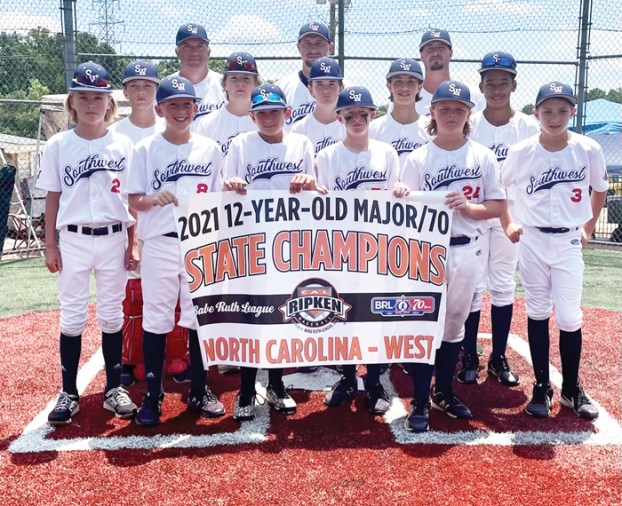 “What you’ll be having is a double-elimination tournament,” Manager Michael Doub of Southwest said. “So, if you get beat twice, you’re out. We could be coming home early or we could be staying all week if you win. Of course, we want to be there all week.”

The regional tournament started Tuesday, and depending on how Southwest does in the double-elimination tournament that includes seven teams, it could finish as late as Sunday. The winners of each of the eight American regional championships, and the winners of the eight International championships will play in the 12-year-old Cal Ripken League World Series from Aug. 5-15 in Branson, Missouri.

“It’s amazing to see what these kids can do because you really wonder when you form an all-star team how kids are going to mesh together,” Doub said. “Because most of the time, there’s different backgrounds, different teams, they haven’t had the same coaching, and you just wonder how we’re all going to play together.”

“These kids have really come together,” Doub said. “They’ve really picked each other up, they challenge each other in practice. And I think that’s one of the things that has really made us better is the way they meshed together so fast.”

Ten of the 11 players are pitchers. Christian is the only non-pitcher, and he’s a catcher, third baseman and first baseman.

“Especially when pitch counts really come in to play here, we’ve got a plethora of kids that can get up on the mound and throw strikes and do pretty well,” Doub said. “I’ve actually got a couple guys that are very elite at this level for pitching age, and some of these guys are throwing between 70-75 miles an hour right now.”

Each of the 11 players on the Southwest team that will be playing this week in the Southeast Regional in Florida played on their individual teams during the regular season before being named all-stars.

“We play 10 games, 10 or 12 games and then we go through a tournament,” Doub said. “And from that we pick the best players from the league, and form the all-star team.”

According to Doub, it’s all an evaluation process to pick the all-star team.

“Here at Southwest, we go through an evaluation process,” he said. “We’ll have 10 or 20 coaches in, evaluate the kids. We’re all on the group app, usually a skills app that we use. And we’ll evaluate the kids 1 through 5. We do it on multiple things — hitting, running, pitching, or strengths. And everybody gets a pretty fair look because you a whole bunch of different coaches from all age groups evaluating kids at all age levels.”

Southwest meshed well and played host to the state championship over Fourth of July weekend.

In the state tournament, there were 14 teams with seven team in each bracket. The top three teams from each bracket advanced to bracket play. Southwest played four teams within its pool and dominated it, outscoring its opponents 62-17. Southwest defeated Iredell County 23-11 in the first game, defeated Surry County 7-2, Union County 16-2, and East Lincoln 16-2.

In bracket play, Southwest defeated the Pineville All-Stars 6-1 in the semifinals. Moore pitched five innings for Southwest and had 10 strikeouts and gave up one hit. In the six-inning game, Gavin Doub pitched the final inning and retired Pineville in order.

Brenner Pridgen, Moore, Tucker Martin, Gavin Doub, Gerlach and Riddle combined for 50 of the 62 hits during the tournament, and Tucker Martin had 12 RBIs.

“The kids were real excited,” Doub said. “I’ll tell you, I was excited. This was the first — I’ve coached a lot of teams and we’ve made it to the states, We’ve never won the states. We finished third both times that I’ve been here with two different teams. So, it was fun to win one and see these kids come out smiling and jumping around and cheering because it’s something they really wanted at this age.

“They’re at the age now where the passion starts to burn in them a little bit, and they really want it.”

Because it was Fourth of July weekend, many of the players and their families didn’t get a chance to celebrate.

“Part of our guys were headed to vacation,” Doub said. “And so we didn’t actually have the opportunity. Then we had to get started on this sponsorship stuff that we were trying to get done and knocked out.”

Even on a holiday weekend, Doub said there were big crowds.

“I think baseball brings a sense of Americanism,” he said. “I’ve probably not seen it packed that much at a state-championship game, or a state-playoff game that I’ve been to. There was hundreds of people there.”

Winning a state championship was quite a feat, but winning at home made it even more special.

“That’s one thing I told them, ‘This is your home turf. You come out and you defend it, and don’t nobody come here and run you over.'” Doub said. “And you want to try to (instill) that mindset to them early so they take pride in defending their home territory.”

Southwest participated in Little League Baseball until it elected to move to the Babe Ruth/Cal Ripken League in 2016.

“Southwest used to be Little League a long time ago and switched to Babe Ruth/Cal Ripken,” Doub said. “And I played Babe Ruth growing up. Both are big and prominent in the area, so it’s basically where you live at.”

“What they’ve got started here at Southwest, it dates all the way back to the ’60s and stuff when Southwest was first born,” Doub said. “You know, this is a baseball area. And the tradition has been kept year after year after year to where great players roll through Southwest.

“And you’ve got the parents who used to play in the early ’60s, ’70s and ’80s, are now coaching. And so now you’ve got that change of events to where it just keeps new blood coming in, and that baseball mentality stays within that organization.”

“The difference between Cal Ripken and Little League — it’s a big difference at this age as far as Cal Ripken is more full-on baseball, like you would see in high school and Little League is a little more scaled back where the pitcher’s mound is at 46 foot, the bases are closer, 10 foot closer at 60 foot,” Doub said. “You can’t take leads, so that’s the difference at 12U Cal Ripken/Babe Ruth is that we’re full-on baseball like high school is playing. It’s just scaled back.”

The games are still played on the small fields.

According to Doub, the talent just keeps getting better in this area.

“You know, when I played it was so different. I lived out in Yadkin County in East Bend, and if we wanted to play anything other than our league then we had to go into summer and travel somewhere to play. And it wasn’t just like travel ball where they’re hosting here at Southwest, and Mocksville, and everywhere around here.

“You had to drive to Raleigh or Charlotte, so it would’ve cost a lot of money. There wasn’t a lot of access. If you wanted to play extra it was AAU ball. And now kids have access to training facilities 24/7, and they’ve got independent coaching, and a lot guys that haven’t gotten out of college and pros, like myself. I coach on the side and do lessons on the side, so you’ve got a whole bunch of access to information and training that you didn’t have before.”