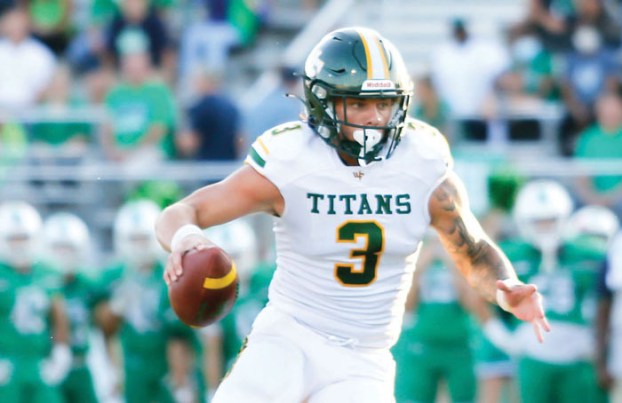 By Jay Spivey
For the Clemmons Courier
Chris Van Kleeck had never played football until his seventh-grade year. And until this season at West Forsyth, he had only played defense on the varsity team.
That changed once this season started in late August when Van Kleeck, who is a senior for the Titans, was named the starting quarterback by Coach Adrian Snow and offensive coordinator Sean Joyce.
“I sat down with all the coaches and they laid it on the table for me and they explained how they’d work it out for getting me my defensive playing time, as well,” Van Kleeck said. “You know, obviously, just because I’d never done it before. But it was a good conversation. It went really well.”
Van Kleeck, who is listed at 6-foot-1, 205 pounds, had only played safety and linebacker since he joined the varsity team for the Titans in his sophomore season. He has played quarterback in all three games for the Titans (2-1), helping them defeat Asheville Reynolds and Oak Grove the first two games, as well as the loss at Weddington two weeks ago.

“He was doing good and doing what we asked him to do,” Snow said. “And it was something we felt was right to do.”

By Jay Spivey For the Clemmons Courier West Forsyth lost 19-7 to Weddington this past Friday night in Matthews, and... read more